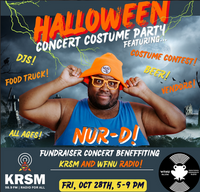 Join us for a fundraiser concert benefitting KRSM and WFNU Radio, featuring local DJs, Halloween costume contest, a performance by Nur-D and more...

P﻿lease help support local community radio by joining us for a night of great music, beer and more. A﻿ll ages, kids in for free!! Online ticket sales $20. Tickets will be available at the door for $25.

Nur-D is one of the fastest rising starts in Minnesota's music scene. Nur-D burst onto the stage in 2018 and has been making headlines ever since. Performing on stages alongside national acts like Migos, Logic, Tyler The Creator, and The Wu Tang Clan. Voted Best New MN Artist in 2019 (Citypages), Headlining The "Best New Bands" Show in 2020 (First Avenue), and being voted Best Live Concert 2021 (Citypages) Nur-D brings an explosion of energy every time he hits the stage. https://www.youtube.com/watch?v=wCaosbDKp-I&t=1081s

Quinn Villagomez, AKA Shimmer, is a broadcast journalist, LGBT media personality, host and MC. Quinn co-hosts RARE Productions on KFAI Radio’s Fresh Fruit, the longest running LGBT radio program in the nation. She is a proud Transgender Latina woman who loves entertainment and media. She currently is the creator and founder of two highly successful Fashion Shows in the Twin Cities - The Purple Ones- A Prince Inspired Fashion Show & designICON: an Icon inspired Fashion Show

Urban Growler® is the first women-owned microbrewery in Minnesota! Urban Growler features a Taproom and Beer Garden, makes traditional beers and a wide variety of specialty brews with a local twist. You can also find Urban Growler beer on tap and in liquor stores around town.

KRSM is a low-power FM radio station based out of the Phillips neighborhood in South Minneapolis. Broadcasting at 98.9 FM, this is a hyper-local platform for amplifying the voices, stories, cultures, and conversations happening in our neighborhoods. Our focus is on communities that are marginalized, misrepresented, and erased by traditional media.

WFNU-LP Frogtown Community Radio is a volunteer-run station operating at 94.1FM in Saint Paul and streaming online worldwide. We operate 24-7, 365 with talk and music shows of all varieties. Our mission is to amplify the diverse voices of the Frogtown Community by providing free training and a broadcasting platform. WFNU is committed to creating programs for and by those who are excluded from or mistreated by mainstream media and serving our neighborhood with local news, perspectives and great music.